How to install Infinity on 6.61 for LME

So you’ve landed here because you want to install the Infinity Permapatch for Firmware 6.61 on your PSP eh?
Short Warning: This will reset your PSP System to its factory settings. It will leave all files on the Memory Stick and Internal Storage but you will be forced to set-up the PSP again as if you’ve only just got it. I don’t know if this process will also wipe the Licenses for the Games but if you have CFW you won’t be needing them anymore anyway 😉
don’t forget that the Infinity Permapatch DOES NOT work on PSP-E1000 Street PSPs (not like they had the Wifi to do this anyway).

Let’s jump right in:
1. Connect your PSP to an Access Point of your Choice and open up the Web-Browser.
2. Now visit psp.darthsternie.net. If it tells you that the Security of the Page can’t be confirmed just continue with yes until you can see the Page. Everything will still be “secured” with TLS 1.0

3. On the Website scroll down until you can see the CFW Links. Search for the Infinity Files. If you own a PSP 2000 or 3000 just choose the File called “Infinity R13”
If you own a PSP Go use the File called “Infinity R13 for PSPGo”. DO NOT install the PSP Go Version on a PSP 2000/3000 or vice versa. It will leave you with an unrecoverable brick and we don’t want that.
4. It will now download the Infinity files and a Homebrew Tool to extract them. If you own a PSP Go and have a Memory Card inserted it will ask where you want to store the Files. Just select “System Storage”.

5. When the PSP shows you a grey Screen saying “Download Completed” you can safely press Circle to dismiss it and then return to the PSP XMB either by Quitting the Browser or pressing the Home Button.
6. Now open up the Memory Stick or System Storage depending on your PSP and you will see a green Application called Installer. Just Launch this to extract all the files you will need to install the Infinity Perma-Patch on your PSP.

7. After the Application has finished Extracting it will throw you back to the XMB. Now open your Memory Stick or System Storage again to see two new Applications (4 if you’ve deleted the LME Installer and Launcher previously).
8. If you’ve not yet launched the LME CFW you should launch it now using the LME Launcher for 661
9. After launching the LME CFW or if you had already launched it previously you can then start the Infinity Firmware Flasher (Without CFW the Flasher won’t launch).

10. After the Flashing Process has ended you can reboot the PSP by Pressing “X”. Your PSP will throw the following Screen on first boot. Don’t worry that’s normal. Just press “Circle” to reset your PSP to factory settings.

12. When your PSP has booted back up you need to open the Memory Stick or System Storage again. This time we want to launch the LME Launcher for 661.
It will briefly show some text on your Screen and reboot the PSP.
13. Now that we are back in the XMB open the Homebrew called “Infinity Bootloader Configuration”

14. Upon seeing the nicely animated infinity logo just press left on your DPAD to get to the next screen. There you will be greeted with two options:
PRO CFW by Coldbird
ME CFW by neur0n
Here you will have to move the cursor on ME CFW by neur0n and then press “X” so that a tiny asterisk appears next to it, just like in the picture.

That’s it. You now have a PSP with CFW on the latest Firmware that will automatically boot as soon as you turn on your PSP. If you should ever want to uninstall Infinity just reinstall Firmware 6.61 or downgrade to another Firmware using this guide.
As a final I would suggest pressing “Select” and changing the “UMD ISO MODE” to either “ME driver” or “Inferno” for the best possible performance in ISO playback.
For the best possible I’ll advise to setting “CPU CLOCK GAME” to “333/166”. “CPU CLOCK XMB” does not need to be set to “333/166” as long as you don’t fill up your Memory Stick too much. When you feel like the PSP is taking too long to load the List of Games on your Memory Stick you can also set it to “333/166” to speed it up a bit.

Master of Desaster, Collector of Firmwares, Current Maintainer of this Archive, I suck at coding and love me some hardware thinkering

Thanks. Also, too… I love the intro uner the moniker of yours. Great work, im PSP exclusive today, im barely born as socially able. Soon ill be employed, as to then explore the gamers realm of today, properly in able means.

This site uses Akismet to reduce spam. Learn how your comment data is processed. 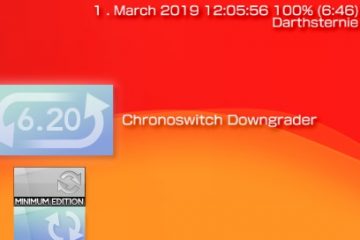 How to downgrade your PSP Firmware with Chronoswitch

You may have updated to 6.61 at some point and now want to install Firmware 6.60 again or just want to return back to 6.20 and it’s permapatch for some reason. But you can’t just Read more… 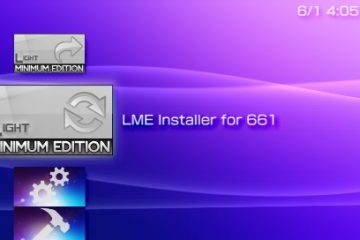 1. Connect your PSP to an Access Point of your Choice and open up the Web-Browser.2. Now visit psp.darthsternie.net. If it tells you that the Security of the Page can’t be confirmed just continue with Read more…

Since you visited this Page you probably want to install a CFW on your PSP so let’s not talk too much and get right to it 😉 First off you will need the following things:A Read more…